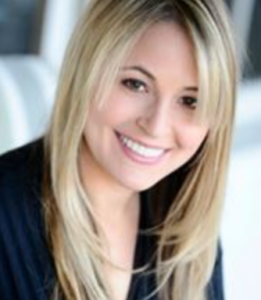 Lindsay Preston Friedman began her career in technology when she founded and built WritingRoom dot com in 2006.   WritingRoom dot com was an online social network for writers that launched in 2006.   It is still operating today and boasts over 50,000 members and hundreds of thousands of pieces of content.  WritingRoom.com won NEOSA’s Best of Tech Awards for Best Website 2009.

In her latest technology start-up, she went back to her college roots, where she worked as a State tested Nursing Assistant at Manor Care Nursing Home in Bainbridge, Ohio.   Over the years, Lindsay often thought about how technology could be used to improve the quality of care given to seniors.  After watching the lack of care towards her grandma at the end of her life, she came up with  CareWear Systems.  In 2018, she began to build CareWear to empower better personal care through data collection, analyzation, and actionable insights all while decreasing hospital readmissions and infections.

Lindsay is also a published author and award-winning writer.

Subscribe to Insider Secrets on your favorite podcast app:

“Being truly an entrepreneur is when you don’t know how to do something, you go figure it out or get someone to do it for you” – [Mike]

“When you’re an entrepreneur, you will fail… but if you can pivot or make the best of it.. you can consider it a success” – [Lindsay Preston]

“If you hear the same thing from a lot of really smart people over and over, it’s probably fact” – [Lindsay Preston]

[02:18] Lindsay describes herself and business strategy as “Motivated”

[16:24] What advice would you give a new entrepreneur today?

[17:30] Techniques and tips for Raising capital for a business

[23:37] Would you advise a new entrepreneur to do a start-up or buy an existing company?

[30:22] What do you need to learn today to take the next step in your entrepreneurial journey?

Welcome to this week’s edition of insider secrets. The show that turns multifamily investing into reality. Each show we interview guests who are seasoned professionals, actively closing and managing real estate deals. Your host Mike Moraski has more than 30 years of multifamily, real estate investing, and property management experience.

Mike is the founder of My Core Intentions. And he’s been involved in over $285 million of transactions focuses on helping you create short-term cash flow and long-term wealth. Here’s your host, Mike.

Hey, good afternoon. It’s Mike with, the host of insider secrets brought to you by my core intentions. And let me ask and I ask every week, have you been thinking about your intentions and what you’re planning on doing? let me ask you what matters most to you in your life and in your business.

A lot of times I say it’s not what we accomplished, but it’s who we become along the way. And how we develop and get there. So MCI invests in its client’s future through education, teaching, and coaching. My thing is, I like to help you create short-term cash flow and long-term wealth.

Empowering you to execute sound real estate investing and property management principles while living a well-balanced lifestyle and develop a strong foundation for your life. today we’re going to talk a little bit different. We’re going to talk about entrepreneurial-ism and being an entrepreneur and my guest today, and I’m joined by Lindsey Preston. Lindsay. You want to say hi?

Hello everybody. Thanks for having me, Mike.

So I’m excited about today’s guest. She’s been a mentor to me and been very helpful. Lindsey’s an entrepreneur who brings great value to the marketplace and or clients she works with. She’s a published author. Award-winning and has helped me recently carry my book, exit plan across the finish line.
Thanks for that again, by the way. And, Lindsay will tell us in one word, what best describes you and your personal, businesses strategies motivated. So if I asked you then today, what are you motivated for? What would you say?
I would say, I think there’s something to be molded for motivated for every day. I go under the belief that whatever that task you have to do, even if it’s laundry, you do it the best you can, and you go forward with it with a positive attitude and you get it done and your task is complete and you can be proud of what you did, no matter what it is during the day.
That’s awesome. That’s pretty impressive when we can even look at laundry that way. Do you cook? so sometimes if a child who only eats noodles, so we’re basically on a noodle bide at the moment.
So Lindsay, tell us your backstory. How did you come about being an entrepreneur? Do you think that you were born that way or did you develop or.
it’s definitely been a learning curve. So I think it’s been more developed. I started out as a writer and an editor and I was a ghostwriter and so probably 20 years ago now I was doing a lot of ghostwriting and there was no Facebook wasn’t around.
And I felt that writers needed a place that they could go and communicate with each other and connect and find editors find help, find people who you could really work with today. It’s very readily available 20 years ago, not so much. So I came up with my first startup and it was called writing room.com and it was where writers could go post their work.
It free, help communicate with each other, and learn about the publishing industry. And so I wasn’t an entrepreneur until then when I decided I’m going to build this website and I actually went about, I was really young. So I learned how to code, to build the website on my own and then realized once you get it to that point, you still need help and you need to hire people.
And that’s when it started to become a business. And when I saw people starting to come do it and the ability to make monetize that I was like, Oh, I have something here. So my journey became began because I had a need. that’s interesting. what you said is you needed to learn how to code in order to get something done.

Every single day. Oh yeah, that’d be perfect. So favorite restaurants, noodles at Lindsey’s house is that Lindsay actually mine’s peanut butter and jellies. Lily’s is noodles good for her? how about a favorite tourist attraction? No tourist attraction in Cleveland. I would say the rock hall. Oh. And if you’re going to come to Cleveland, probably.
And you like that. Say it again and you like music, I would say. Yeah. Cool. And then, most memorable moment in the last six months. So we were fortunate enough literally like days before COVID hit and stuff started closing down. I got to see the brothers, the Allman brother’s 50th-anniversary tour in New York City.

Wow. Nice. There are some clips of that on YouTube. I was just the other night. Fantastic. Cool. Yeah. Yeah. I bet. I bet it was the last concert of since COVID. Yeah, so you’re an old rock and roller is what it sounds like old soul. That’s good. So listen, if people want to get ahold of you or pick your brain a little bit more, how did they do that?
You can reach me at lindsay@writingroom.com and I’m pretty good about getting back to emails. Great. listen, thanks for today. Thanks for the time. And the insight. The knowledge is always great for people to dive into and get some results from. And, we’ll be here next Tuesday again on insider secrets.
I want to thank everybody for listening in our listeners today. And Lindsay really thank you for being here and for all your input. Thank you.
Thank you, Mike, and thank you for joining us for another great episode of insider secrets as always Insider Secrets is brought to you by my corn tensions. Join us on social media and visit my core intentions.com where you can get expert coaching on all things, multifamily investing in property management.
We’re looking forward to having you back again next week for more insider secrets.